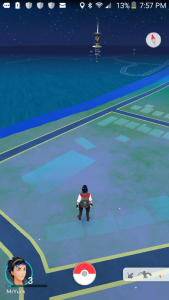 Unless you’ve been living under a rock for the last 10 days, as of the date of this post, you may have heard of a new app for Android and ios named Pokémon Go. Originally released in the U.S., Australia and New Zealand on July 6th, it became available in Germany on July 13th, and is being rolled out in other European Countries as we speak. You may have seen people doing it. Personally, the OCNA blogger, Mr.Yuck, has observed about 40 people playing in those 10 days, most of them in groups, and most of them in their late teens. That doesn’t mean that he, self described as “well over 40” hasn’t tried it too. As a matter of fact, the screen shot you see here (click to enlarge) is his character standing in his house, looking at a Gym and three Pokéstops in a nearby County Park. Expect a review of the game from the perspective of a long time, old school Geocacher who still plugs a handheld GPS into a computer, in the near future. That won’t happen until he reaches level 5 though, which you must do to participate in all aspects of the game. But for now, we thought it was rather interesting how some early news articles “remember” Geocaching, and compare it to the craze over this new Augmented Reality game. One article even suggests going Geocaching instead of playing Pokémon Go. Four articles are outlined below: