Many Geocachers are familiar with coord.info redirects (or “link shorteners” or “shortcuts”), which can be used only for Geocaches, Travel Bugs and Waymarks listed on Geocaching.com and Waymarking.com respectively. But did you know there is another redirect tool out there that works for almost every other Geocaching website in the world, as well as Geocaching.com listed caches, Travel Bugs and Waymarking.com listings? And as an added bonus, it’s even two characters shorter! That service is provided by the website coord.ch, and it’s very easy to use. Some cachers might not even be familiar with Groundspeak’s coord.info service, let alone coord.ch, so we’ll start with the basics.

END_OF_DOCUMENT_TOKEN_TO_BE_REPLACED 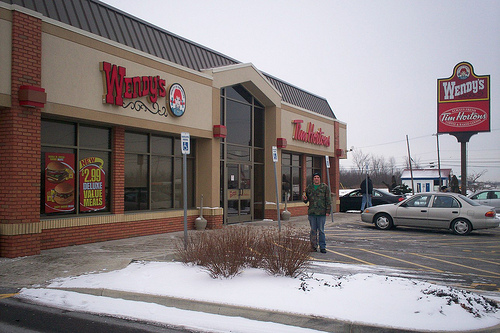 Three weeks ago, we had one of our sporadically featured OpenCaching Network caches, Der Laputische Gruß, a Locationless Cache listed on our sister site Opencaching.de, but with posted coordinates in Washington, D.C. We had planned to do a follow up post on the general topic of Locationless Caches, complete with the OCNA Blogger, Mr. Yuck, going out and finding that cache, and a short video of him rendering the very strange Laputian salute in public. Well, thanks to the coldest and snowiest Winter on record in 25 years or so in the Northeastern U.S., that didn’t happen! So here’s a replacement picture of him logging the Locationless Cache Timmy Time (Terracaching.com waypoint name LCSY), way back on January 21st, 2007. Although this cache type was banned forever by Geocaching.com in January 2006 (in favor of the not very popular Waymarking.com), we have information on where you can go to still “find” over 1,500 of them, or even create your own for others to enjoy. We also discovered some historical fun facts about this cache type in the course of our research, so read on!

Although generally known as Locationless Caches on the alternative Geocaching websites that still accept them, they were actually known as Locationless (Reverse) Caches on Geocaching.com. The Wikipedia definition, which is pretty good, is as follows: “Locationless/Reverse caches are similar to a scavenger hunt. A description is given for something to find, such as a one-room schoolhouse, and the finder locates an example of this object. The finder records the location using their GPS receiver and often takes a picture at the location showing the named object and his or her GPS receiver. Typically others are not allowed to log that same location as a find.” The reverse designation does make sense, as you are giving the cache owner the coordinates of the object, “reversing” the normal process of them providing you with the coordinates of a location that you proceed to.

In the Der Laputische Gruß blog post, we mentioned that Locationless caches are alive and well on fellow alternative Geocaching website Terracaching.com, and have been since that site’s launch in the Fall of 2004. There are currently 1,278 Locationless Caches available there as of the date of this blog post. They are scored separately from traditional caches. Also of note is that Terracaching.com does not support file uploads, you must host your logging photo’s somewhere on the web yourself, and use simple BB code commands to post them in your log.

There are other alternative sites where you can find LC’s too though. The 2nd most popular choice would be Geocaching Australia, which lists 379 of them as of the date of this post. A small percentage of them are designed to be done in Australia, but most are not. Additionally, other alternative sites have a handful of LC’s. OCNA Admin Dudley Grunt has compiled a list of the 16 Locationless caches available on Navicache.com in a post to their forums. GPSgames.org, which has many “GPSgames” besides Geoaching, has 5 Locationless Caches on a quick glance through their small number of listings. And it has been shown that some members of the OpenCaching Network have a handful of LC’s such as Der Laputische Gruß on Opencaching.de. These are generally listed as an unknown cache type, with no container. We at OCNA however, not included! We do not accept Locationless Cache submissions! This decision was made early on by our founder RVRoadTrip (since retired from the site), and we simply have never veered from that policy. We reserve the right to some day change our mind and list Locationless Caches, never say never!

One thing that has been an issue with LC’s dating back to 2001, when Geocaching.com started listing them, is the ability to search for them. How do you know what the LC owner is looking for, without reading hundreds, or even 1,200 cache pages? Sometimes you can get a pretty good idea from the cache name, but usually not. The solution is that people have made lists of available LC’s on the Internet, with links to the LC, and a short (usually 2 sentence or so) overview of what the logging requirements are. The OCNA blogger joined Geocaching.com in August, 2003, and remembers several personal web pages documenting the available LC’s. Most or all of which probably no longer exist. Why would they, they haven’t been needed in over 8 years! For Terracaching.com there is such a list on sister website Terracaching.eu, although it looks to be almost a year out of date at press time. As previously mentioned, OCNA Admin Dudley Grunt has made a list of the available LC’s on Navicache.com. If one exists for the 379 LC’s on Geocaching Australia, we haven’t found it. If we are wrong on either account (a more updated Terracaching.com list, or one for Geocaching Australia), be sure to let us know!