Published on Oct 25, 2013
The Doc brings you along while hiding his EPIC HALLOWEEN GEOCACHE SERIES! Enjoy Part 1 of this 2 Part Series!

OTHER VIDEOS BY THE DOC! —- http://www.youtube.com/thegcdoc 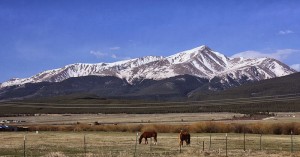 The highest peak in the picture above is Mt. Elbert, located in the San Isablel National Forest, in Lake County, Colorado. Rising to 14,433 feet above sea level, it is the highest peak in the Rocky Mountains, the 2nd highest peak in the 48 contiguous United States (after Mt. Whitney in California, which is less than 100 feet higher), and the 14th highest peak overall in the United States. Obviously, it is also the highpoint of the State of Colorado. Hiking to it’s summit, although very strenuous, and involving a minimum 4,000 foot elevation gain, does not require any special mountaineering or rock climbing skills. Reaching the summit also happens to be a virtual cache on our website, Mt. Elbert Summit, and is our latest Sporadically featured OCNA cache on the blog.

We were very happy that we were able to contact the cache owner, kingbee, and the only two finders to date, kejdad and tripman1. Kingbee joined our website a little over a month after it was launched, and Mt. Elbert Summit is the 312th cache listed on our site. When asked why he made it a Virtual Cache on our website, said because “I enjoy climbing and hiking the mountains in Colorado, Most of the time it is so peaceful, quiet and serene”.

You’ll notice on the cache page, Kingbee gives the location (but not coordinates) of 3 starting points for the hike. One of them listed as 2WD access, two others as 4WD access. Tripman1 was the latest to try to summit the peak, at least as an OCNA member logging the virtual cache! He made his attempt on August 31st, 2013, starting from the Colorado Trail trailhead, as shown. According to Wikipedia, this route is a 4,100 foot elevation gain. He was more than happy to share the details of his experience with us. “I have enjoyed being able to chose geocaches from several websites and the opportunity to grab two different caches on one difficult climb presented itself over the Labor Day weekend. I had my eye on Mt. Elbert’s Summit (OOU0138) for a while, and another climber was finishing his ascent of all 54 peaks with the Mt. Elbert Climb, so I used this as motivation”.

He went on to add: “The climb took about 3.5 hours up and 2.5 hours down. At the halfway point around 11,500 feet you pass the treeline and climb the rest of the way on bare rock. I was happy to have remembered sunscreen here. Since this was a holiday weekend there were many other hikers on the trail and if you did happen to run into trouble, you would have plenty of help.  It was just a matter of pace and eventually I was on the summit. There were about 100 to 125 climbers on the summit to celebrate the accomplishments of the climber who had climbed all 54 peaks. The banner in the background commemorates the event and if you look closely you can see all the signatures of the participants. The view from the top is amazing and I really appreciate kingbee placing a virtual here and helping motivate my climb to the top”.

Kejdad, another of our users from Colorado, made the ascent a little over 3 years earlier, July 29th, 2010.  He posted a somewhat brief log on our website, but referred us to his log on one of the many peak bagging websites on the internet for some detailed quotable material. He says “WOW! What a hike! I came up to Mt. Elbert with friends, who left me in the dust. I plugged along in the rain, hail and sunshine and finally made it up to the top! My friends got there and it was still raining, so I saw them as they were coming down. I made it to the top and the rain stopped and clouds cleared away and I was blown away by the amazing view! It was definitely worth the hike! I ran into a guy who was roadtripping around the country and happened to be on Mt. Elbert that day.”

He went on to describe his descent: “I made my way back down and ran into a church men’s group from Omaha, all of whom were taking their time getting up there, just like I did. I didn’t use my rain gear going down and made it back to the car in under 4 hours (which all things considered is pretty good for me!) I spent 8 hours total on the mountain. What a great experience. The photos can’t even come close to doing justice what I saw up there.”

Kejdad has also made a couple Colorado Mountain Summits into Virtual Caches on our website. Another of the 54 “Fourteeners” in Colorado (Mountains with an elevation exceeding 14,000 feet), Mt. Bierstadt, is featured as our OU059D. Additionally, he has made summiting 12,618 foot Lone Cone, in the Southwest corner of the State, a Virtual, our OU01F4.

Great cache, the Mt. Elbert Summit Virtual. We here at the blog would like to thank our three contributors to this post, all of whom are regular users of our site with many finds and hides apiece. (by our standards that is). Inspires you to go out and bag some peaks doesn’t it? Including the Blogger, who would now like to go bag a few Adirondack summits, which he hasn’t done this Century. 🙂

Now call in with Skype for free ! 60 minutes of geocaching comments and stories. Join us as we discover new adventures in the field of geocaching every Saturday at 3:00 pm. EST on Blog Talk Radio with your host – Hikerjamz and co-host – Kenny Gibb.

We at OpenCaching North America like to promote the fact that there are several Smartphone Geocaching apps compatible with our website (as well as several of the other OpenCaching nodes, as they’re called). We owe this to OKAPI, the OpenCaching API, and of course to the independent European developers who have written these applications. You can always access the list of currently compatible phone apps from any page on our website, at the link www.opencaching.us/articles.php?page=apps. Not a very fancy webpage, but it gets the job done.

We aren’t going to get overly technical in this post, but an API, which stands for Application Programming Interface, could be described as a software to software interface, as opposed to an end-user interface. You could say that with API’s, applications talk to each other without any user knowledge or intervention. Basically, we give developers access to our database, through OKAPI. Keep in mind, in the case of Geocaching websites, this is not only used for smartphone apps, and a developer could easily write a third party Geocaching Statistics program, for Windows and/or MAC.We must admit, “stats programs” for any of the OpencCaching nodes are not in high demand. But as an example of a non-smartphone app use of our API, Scout from Gpsgames.org uses the API to display OpenCachingNA caches on his Google Maps powered cache maps, along with caches from Navicache.com, and caches and Shutterspots listed on his own website.

OpenCaching.de is by far the busiest of the OpenCaching nodes, and as far as we know, still the 2nd busiest Geocaching website in the world, after Geocaching.com. So we at OCNA (and the whole Network) are excited that many, many developers are going to be taking a serious look at developing applications for our Network. As it stands, at least one developer a week requests a “key” for OKAPI. We get email notification of this.

So let us close by reminding you we have smartphone apps! Five of them, to be exact, along with two others that you can send our .gpx files to. They are OpenCaching for Android ($4.99), GeoCaching Buddy for Android ($5.23), Columbus for Android (FREE), GeoCaching Buddy for Iphone ($7.99) and GeoBasic for WindowsPhone ($1.99, and has a free trial version). Additionally, you can send our .gpx files to the great c-geo for Android (will always be free, and full compatibility with OKAPI is planned) and Geosphere for Iphone ($7.99). The Blogger is one of five people in America who uses WindowsPhone, so he has used GeoBasic, and gives it a thumbs up. Have you tried using any of these apps with our website? Feel free to comment below!

Post Update: Just four days before this blog post, on October 13th, 2013, the developers of the Geocache management software GAPP (a program similar to GSAK) registered with OKAPI, and announced OKAPI support starting with their latest version, 1.9.3.0.

Published on Oct 15, 2013
The Doc and his son practice some good karma GEOCACHING! They need all the luck they can get as the Doc misplaces… something!

OTHER VIDEOS BY THE DOC! —- http://www.youtube.com/thegcdoc