We currently have someone mulling over the questions for what will most likely be our longest interview ever, so we’ve had the idea for this “filler” blog post in the back of our minds for a while. This blog is just under 2 years old, and this is the 208th post. We have interviewed people involved with many Geocaching products and services in that time. We have noticed that some of those products and services never got off the ground, or no longer exist. Fortunately, we’re not aware of any Geocachers who no longer exist. 🙂 Above you see a ROVE, a proposed Bluetooth gadget for instant geocaching and trail sharing. We interviewed Jonathan from Sparkyard, Inc. for this blog on April 18th, 2013. ROVE, best we can tell, was never manufactured, and the ROVE website, and Facebook page no longer exist. Their Twitter account is still up, but hasn’t been posted to since April 15th, 2013, three days before that blog post.

We’ve interviewed the creators of many successful crowd funding campaigns over our 208 post history, but unfortunately, our first interview with the creator of a campaign which didn’t meet it’s goal was in October 2014 with Steve Weeks, the man behind the music of the fictional band “The Travel Bugs”. Steve was hoping to raise $16,000 to fund his/their second album “Pimp Your Cache”. With about 8% of the goal met, Steve himself cancelled the Kickstarter campaign with a few days left. He said in an update to the project on the campaign page “Given the current numbers for this project, it’s obviously not going to get funded.  I’m going to cancel it (somehow “cancelled” seems better than “unsuccessful”).” Good attitude! He also went on to point out his/their first album is still available on CD or for download from CDBaby.com.

This is by no means a “hall of shame”! Maybe Jonathan and Sparkyard will find a way to get ROVE or another product to market; maybe Paul will create another great website useful to Geocachers that gets higher traffic; maybe Steve will find a way to get that second album recorded and released. We wish them all luck in their future endeavors. 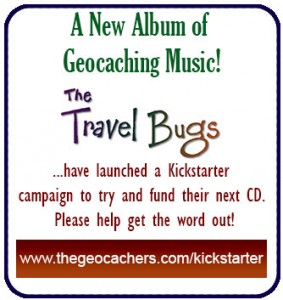 We’ve interviewed the creators of two current Geocaching related Kickstarter campaigns here on the OCNA Blog in October, 2014. Most recently was Steve, the man behind The Travel Bugs band, and their campaign for their proposed new album of Geocaching related songs “Pimp Your Cache“, on October 16th. Clicking on the image will take you to their campaign page. As of the date of this post, Halloween night, they are only 7% funded with 13 days to go in the campaign. Can you help them out? They could really use it. It’s a very worthy project, and as those of you familiar with Kickstarter campaigns  know, they will not receive any of the pledged funds if their goal is not met.

The GoCache Geocaching Card Game, which we blogged about one week earlier on October 9th, has been extremely successful; it was funded the first day, as you can see by this little badge they earned for their project page from kicktraq.com. This project is currently 281% funded with 8 days to go. They have also reached 4 of their 5 so called stretch goals (which we didn’t cover in our interview with them). These are basically “upgrades” on their finished manufactured product; for example, when the 100 backers goal was reached, all GoCache games were upgraded to high quality linen cards. There is still time to help them reach their final stretch goal!

Following on the heels of the highly successful campaign for the GoCache Card Game, this week we have our second consecutive blog post on a Geocaching related Kickstarter campaign; Pimp Your Cache! – New Geocaching Album by The Travel bugs, which has went live the day before this blog post, Wednesday, October 15th, 2014, and has been chosen as a staff pick by Kickstarter.com. The Travel Bugs released their first album of Geocaching related songs, “Found it”, in 2010, and are hoping to finance their second album, obviously titled “Pimp Your Cache!”, with this Kickstarter campaign. We were able to get Steve Weeks, the man behind the band, to answer some questions for us about himself, the “group”, and the campaign.