Part two of two, You can find part one here. Since we at the world-wide Opencaching Network, which includes Opencaching North America, are often confused with Garmin’s Opencaching.com, I figured a blog post comparing the two listing services was in order early on in the history of this blog. This blog post is highly influenced by a post fellow OpencachingNA Admin Dudley Grunt made to his local Geocaching forum in July 2012, and he posted links to that post at the forums of all the U.S. based alternative Geocaching websites. I asked him if he wanted to come on and do a guest post, but he was OK with my using it as reference material, and I promised to not to plagiarize it too much!!

Ownership:
Garmin: Like Groundspeak, the Garmin site is run by a corporation with relatively significant money to  invest in the site.
OCNA:  The site is funded and run on a fully volunteer basis, essentially, as a not-for-profit entity. We pay for our three domain names and web hosting (at the well-known website host Rackspace.com) out of our pockets.

Cross Listing:
Garmin: Strongly encouraged. With a few mouse clicks, you can import thousands of hides or finds. Often runs contests encouraging listing caches on their website. There is no direct way to tell whether or not a cache is cross listed, and no way to filter for unique hides to their site in searches.
OCNA: Permitted, but unique hides are preferred. The very first page in the cache submission process contains text that informs the hider that we accept cross listings, but prefer unique caches. The cache submission page contains fields to link to sites the cache may be cross listed on. We have a special attribute “OC.US ONLY” available for caches that ARE unique to the site. It is possible to filter searches to show only the unique hides via our “advanced search”.Currently, about 55% of our listings have the “OCUS ONLY” attribute, and we believe approximately 75% of the listings are unique.

Reviewers:
Garmin: None, per se. They have “Peer Reviewing”. The site members vote up or down on caches. The blog author has not participated in this, but from reading their forums, it seems to be often problematic.
OCNA: Caches reviewed by three site admins (Mr.Yuck, DudleyGrunt, NativTxn), who treat our guidelines AS guidelines and can work with individual caches/cachers to approve things that might not be 100% within the listed guidelines. Caches are generally reviewed & published the same day. Since the blog author, Mr.Yuck, is a newbie admin, he has not reviewed any caches to date.

Membership Fees:
Both sites are completely free, with all features available to all users.

Rating of caches by users:
Garmin: Finders can give caches a rating based on “Awesomeness”. Garmin uses a sliding scale from 1.0 to 5.0 (in 0.1 increments – that’s 49 possibilities for each).
OCNA: Cache finders can rate each cache on a 5 point scale and can give a “Recommendation” to 1 out of every 10 caches they find (this is similar to, but predates Groundpeak’s “Favorite Points”).

A few notes first, I hope to post to this blog at least once a week, but I’m currently spending a lot of my free time educating myself with the OpencachingNA Linux server. Boy, is that a learning experience. It’s only been eight days since the first post. Note that the “Latest Geocaches” and “Latest Log Entries” to the right of this post are from an RSS feed, and should be updated every time you view this page. As well as our Twitter feed too, of course.

OK, why are there two totally different alternative Geocaching entities calling themselves Opencaching? This short answer is, I don’t know, ask Garmin! We, Opencaching North America, are part of the world-wide Opencaching network, established in 2005 with Opencaching.de There are currently nine Opencaching nodes, as we call them, that are part of this network. Opencaching.jp (Japan) has gone dark, and Opencaching.es (Spain) really just points to the German website, Opencaching.de. You can view them all at Opencaching.eu All characterized by their distinctive white and blue color scheme. Garmin came along, and purchased the domain name Opencaching.com in September 2010, and launched their website in early December, 2010.

But that’s not the whole story! The domain name Opencaching.com was originally purchased by “some guy named Hank” on September 15th, 2003. I have no idea who he was, or his Geocaching handle, because he has been obliterated from the WHOIS registry, being the original owner of an expired, and for several years vacant and for sale, domain name. Thanks to the Wayback Machine from archive.org we can see several snapshots of how his website looked from September 2003 until late December 2005, when he apparently decided he was going to throw in the towel, and the original Opencaching.com was never developed as an alternative to Geocaching.com.

In This snapshot of Opencaching.com from December 31st, 2005 you can see what Opencaching.com looked like shortly before “Hank” let it expire. All of his “Site news” is there from day one in that snapshot, so you can follow along on his updates on the project. He had forums, where people apparently discussed the project, but they were not indexed by archive.org.  Although he never got the project off the ground, you can see he was happy the concept took off somewhere (i.e. Germany), per this quote from the last post under site news: “This project has been off the radar for some time (measured in quarters or years at this point) … the one brightspot being that our German friends at opencaching .de had the resources and committment to make the concept work … perhaps someone will make other core nodes?”

I’m not sure exactly when “Hank” let the domain name expire, but Another snapshot of Opencaching.com, from May 2010, shows it with a classic “domain for sale” placer page. As previously mentioned, the domain name was then purchased by Garmin in September 2010, and Opie the Awesome (blue) Squirrel was born.

The next blog post, which I can tell you won’t take 8 days, as I was going to make it one post, but decided to make it two, will be “”Our” Opencaching vs Garmin’s Opencaching, a comparison of sorts”. Then after that, we have a couple interviews lined up, and possibly our first guest blog post. 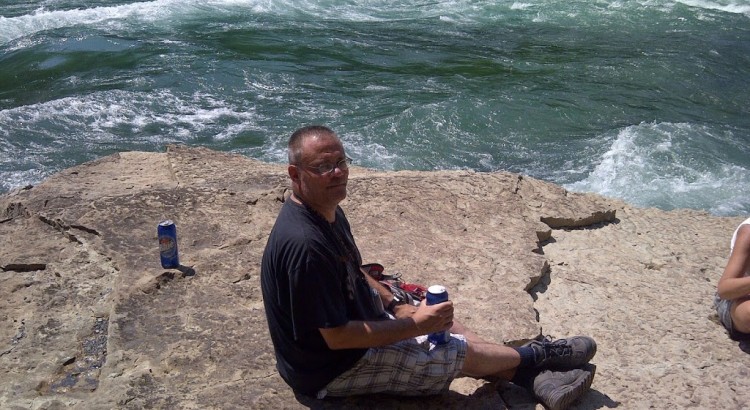 Welcome to the first blog post of the Opencaching North America blog! You can read the introduction about who we are to the right of this post. We are a free, volunteer run and volunteer funded Geocaching listing site. So as you can see, this blog is a standard free Google Blogspot blog. We will eventually host it on our own server, although we have to do some domain name ownership shuffling amongst the Admins first. Then we may move to WordPress, or other such dedicated blogging software.

I am Mr.Yuck, the primary author of the blog. But you can call me Jim (last name undisclosed). I am from the Buffalo, N.Y. area, and have been Geocaching since August, 2003. There are very few pictures on the Internet documenting my existence, but I managed to dig this one up in someone else’s Geocaching log (taken July, 2012); this is me enjoying a 24 ounce can of Labatts Blue after a 1.2 mile hike to a .50 Cal ammo box. That’s the lower Niagara River rapids (i.e. below the Falls) in the background. 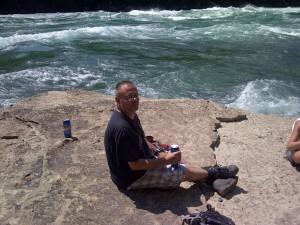 I joined Opencaching North America (then Opencaching.us) on the day of it’s official launch, August 18th, 2010. I guess you can say I’ve always been an alternative Geocaching website kind of guy. I blame this on the oldest alternative site, www.navicache.com originally being started in Rochester, N.Y. about 90 miles from where I live. Many of the early 2001-2003 caches in my area were cross-listed on that site, and many of those cache owners knew the owner of that site personally from Geocaching events. So I just went with the flow, and cross-listed my caches there. I later joined www.terracaching.com (founded in late 2004), and www.gpsgames.org (founded in 2002, but didn’t start listing Geocaches until 2005), and of course Opencaching.us when it came along. I should note that I’ve always used www.Geocaching.com and have been a premium member since February, 2004. How can you not use Geocaching.com? I just feel it’s a good thing that there are alternatives out there, and I use them. Oh yeah, another thing,  I’ve been playing Munzee since July 2012, and have captured about 130, and deployed about 20 there. Not too much of a fanatic for that game yet.

About this blog: Ideally, I would like this to be a “Geocaching in the news”, and general interest Geocaching blog, along the lines of the great www.notaboutthenumbers.com blog. I would like people to read it even if they don’t create an account, or visit our website. But we want you to, obviously. I say ideally, because I’d be lying if I didn’t say a decent portion of the posts will be about “us”, or our fellow alternative Geocaching websites. You can expect to see posts about Geocaching in the news (say for example, a major bomb scare incident), interviews with “famous” or interesting Geocachers, as well as “Sporadically featured OpencachingNA members” (as opposed to a regular cacher of the week or month) and “Sporadically featured OpencachingNA caches”, again not a regularly scheduled feature. I will also pursue many subject matter experts to write guest blog posts in their area of expertise. Oh yeah, and I plan on giving stuff away!! Being the blog for a Geocaching listing service, although admittedly a small one, does carry some weight. Once we get some decent readership numbers, I can see sponsors donating prizes to give away, also like the notaboutthenumbers blog.

We are excited to be the first U.S. based alternative Geocaching website to launch their own blog. Thanks for reading, and please come back again!