Not revisited in the physical sense!! It’s been a little over 2 years (June 8th was the anniversary) since Chris Wereley, AKA Stormgren-X, along with a non-Geocacher partner, took an 8 day canoe trip to find this remote cache, 4.5lb Walleye, in the wilderness of Northern Ontario. At the time in 2013, it was the world’s oldest 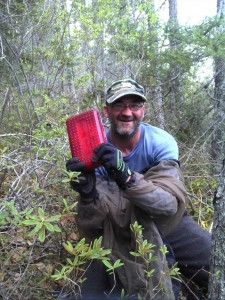 unfound cache, having sat untouched in the wilderness for 12 years and 7 days; it has not been found since, nor has anyone announced their attention to be the next do so on the cache page. We thought this was such an amazing story that we did not one, not two, but three blog posts on the subject (two of them were while the whole Geocaching world was watching his progress on a SPOT tracking device, the third being an interview with him). We do have a couple of updates to this story. First of all, you may notice from the very last sentence in the interview blog post that Stormgren-X placed a cache at the abandoned settlement of Ghost River, about 30 miles upstream from the 4.5lb Walleye cache. After about a year of not seeing it published, we wondered “OK, where is it”? We at OCNA thought maybe one of the Geocaching.com Ontario reviewers rejected it under their “vacation cache” rules, so we emailed Chris and offered to publish it on our site. Nope, he just had a little accident, and lost all the Waypoints in his GPS!

The lost 29 page journal of Stormgren-X:

More accurately, the existent, but nearly impossible to find, 29 page journal of Stormgren-X. Also in our interview blog post, we mentioned Chris gave us permission to host this journal, a .pdf that contains over a dozen pictures and over a dozen videos from the trip, on our site. He originally posted it on the the Wikisend file sharing website, which only hosts your (large) content for a few weeks. Apparently our SEO skills need a little work here at OCNA, because this thing is nowhere to be found on a Google search for any of the keywords relating to this canoe route, or the 4.5lb Walleye cache itself. In our defense, it is a .pdf, and not a “webpage” in the classic sense. We’ll keep working on that, but in the meantime, here is the nearly secret URL to Stormgren-X’s journal: https://www.opencaching.us/AlbanyRiver-4.5lbWalleye.pdf  Warning: We did say its a 29 page .pdf; may take a while to load, depending on your internet connection. 🙂