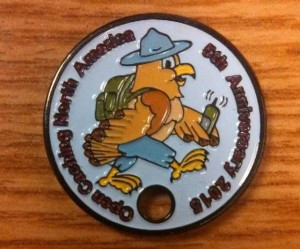 Even though our 6th Anniversary has since come and gone.  We’ll explain that later. The OpenCaching North America 5th Anniversary Pathtag, (our 2nd Pathtag commissioned) is sold out, and no longer available for purchase to the general public from TheGeocoinStore.com. A total of 510 were produced. However, 400 of those were produced for sale to the general public, and the other 110 were in fact an owner refill (they had a 10% free tags promotion going on the month we ordered our refill). We still have quite a few left, so we’re giving away a total of 10 of them, to three different lucky winners in a blog contest now!

Many readers may remember we also gave away 10 of our Pathtags 3 times in the past, starting in September, 2013, with our long retired 1st Edition tag.  Not to one person though, we spread them around a little bit. As before, we will have three separate winners. The 1st prize winner will receive 5 of our Pathtags; the 2nd prize winner will receive 3 of our Pathtags; and the 3rd prize winner will receive a paltry 2 of our Pathtags. These tags were designed by our Graphic Artist Nancy, of The Deadliest Cachers, of course with plenty of design input from the OCNA team. They feature our Mascot Hank The Hawk (also designed by Nancy) and they turned out very nicely, and have an OpenCaching North America tag back (blueprint shown, that anyone can use for their own Pathtags, and it’s design is the major reason our 5th Anniversary tags were produced so late) with the tracking number on our back for logging.

To enter the OCNA 5th Anniversary Pathtag Part Deux giveaway, fill out the form below with your name (as it says, “Geonick” is fine), and a valid email address. Note though, that someone once entered one of our contests as Geonick, and that’s already been done, and was only funny once. (They didn’t win, by the way). We will never use your email address, and the Google Document storing all the entries will be deleted after the contest. There are rules, of course, which appear below, in italicized text above the entry form.

Rules: To enter, provide your name and email address in the form below. One entry per person, and one entry per email address. There are no Geographical restrictions, contest is open to anyone in the world. The contest begins upon publication of this blog post on Wednesday, September 21st, 201, and ends at 9:00 PM Eastern Standard Time on Thursday, September 29th, 2016. Three winners will be chosen at random from the entries received. Winners will be notified via email, notification being sent from the email address opencachingnorthamerica at gmail.com (be sure to check your spam folders!), and must respond within 48 hours, or the prize will be forfeited, and another winner will be chosen. Once the prize is accepted, you must provide a valid mailing address, and the prize will be sent out via the U.S. Postal Service .