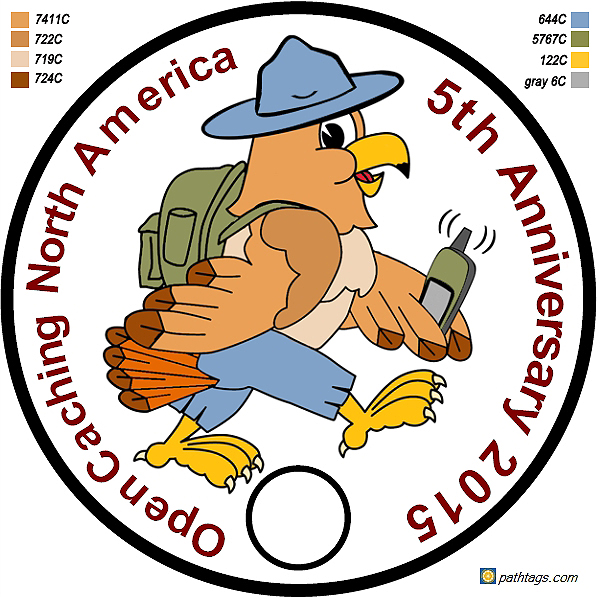 After several delays, most notably getting our free Pathtag back that anyone can use for their tags up and running (our blog post about that here), The OpenCaching North America 5th Anniversary Pathtags are finally on sale to the general public. You can see them as the most recent item for sale on the main page of Thegeocoinstore.com. Alternatively, here is our Pathtag listing on that site.

Like our OCNA 1st edition Pathtag, released late summer, 2013, our 5th Anniversary tags can be purchased in lots of 20 for $20 from TheGeocoinStore.com under a “club fundraiser” program. You’ll note the listing for our tag on their website references us receiving $5 for every 20 pack sold. However, that applies only to registered non-profit LLC’s, one of which we are not (although we have, and still are considering, that legal status), so that $5 is payable only in Pathtag cash. The OCNA team will of course use this Pathtag cash to buy more of our own tags, which we will generously distribute to promote the website. We owe several tags to lucky players from our August, 2015 sitewide contest, and of course we will be giving some away on this blog. Perhaps even multiple times.

The tag features The OCNA Mascot Hank the Hawk, and was created to commemorate our 5th Anniversary on August 18th, 2015. And yes, we did start the process long before then; we told you there were several delays. We certainly didn’t expect them to not be on sale until early 2016, but what can you do? Like Hank The Hawk himself, the tags were designed by Nancy of The Deadliest Cachers, a Geocacher from Derby, New York. Her cache page graphics are sort of legendary in Western New York. She has also designed several Pathtags for fellow Geocachers, as well as us. Feel free to contact her via her profile on Geocaching.com, as linked above, if you’re interested in her services. 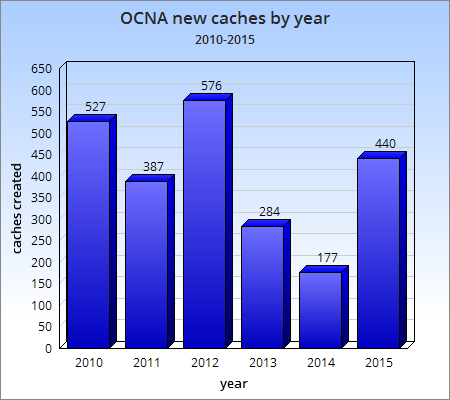 On December 11th, 2014, this blog reported that there was a noticeable decline in new cache placements in most (but not all) Countries in the world in 2014 vs. 2013. This was using Geocaching.com numbers (as given by project-gc.com), because lets face it, they probably have a 95% worldwide market share of Geocaching listings. Well, those numbers were down again in 2015, and that’s from the bad 2014 numbers! Just as an example, the numbers for the United States were:

You can see from our previously linked to blog post from Decemember 2014, that we too at OCNA were feeling this trend, with 2014 being the worst year of our existence, as defined by new cache placements. Well, we decided to buck the trend in 2015, and in a big way, per the bar graph. We had our 3rd best year, with 440 new caches published! And we really blew up in Canada, as 77 of those caches were located there, as opposed to only 4 in 2014.  We attribute this 149% increase to gaining quite a few enthusiastic new users who created a lot of caches, by our standards. Some, but certainly not all of them coming over from Garmin’s opencaching.com site, which was on life support for a couple of years, and finally passed away in August, 2015. We also had our 2nd annual site run contest running the entire month of August, that certainly helped as well. We plan on having a third annual contest in August, 2016, and who knows, maybe more contests.

We thank all our users for helping us to buck the trend. Please help us to do it again in 2016!!