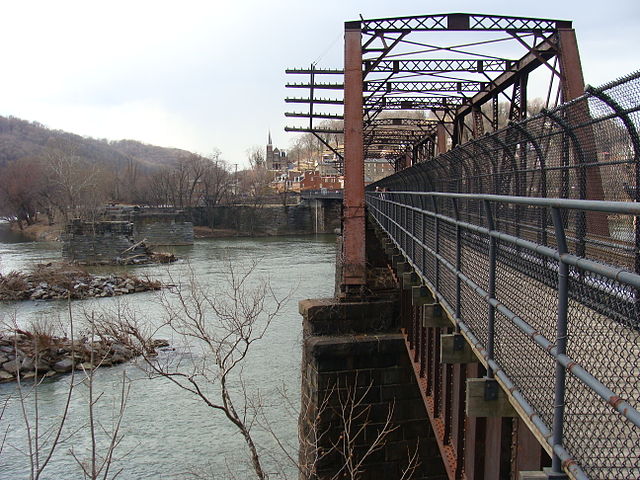 At the approximate midpoint of the pedestrian walkway on this railroad bridge over the Potomac River is the starting point of the Appalachian Trail (hereafter referred to as the AT), in Maryland. That’s the historic town of Harpers Ferry, West Virginia across the river, which just happens to be the location of Appalachian Trail Conservancy HQ.  The AT in Maryland follows a 40.9 mile route, mostly along the backbone of South Mountain. The AT Conservancy rates the Maryland section of the trail with an overall difficulty of 2 out of 10, (which is quite easy by AT standards), and the elevation ranges from 230 to 1,880 feet. We assume, that as outdoorsy types, most Geocachers are familiar The AT, especially those in the Eastern half of The U.S. and Canada. But we’ll give a quick overview of the whole trail before discussing the Maryland section. And Geocaching, of course.

Properly known as The Appalachian National Scenic Trail, it is approximately 2,200 miles long, and runs from the summit of Springer Mountain in Georgia to the summit of Mount Katahdin in Maine. It passes through 14 States in the process, including the near 41 mile stretch in Maryland. Elevation ranges from 6,643 feet at the summit of Klingmans Dome in Tennessee, to 124 feet in Bear Mountain State Park in New York. The Majority of the trail is National Park Service lands, which means no Geocaching! The Appalachian Trail Conservancy put out their Geocaching policy in 2008, and the OCNA blogger does remember them requesting hundreds of old-time caches along/near the trail be archived. However, the trail runs through many State or local Parks where Geocaching is permitted, as we shall see is the case in Maryland. Here, by the way, is a very interesting article, 10 things you should know about The Appalachian Trail, from The History Channel.

About the AT in Maryland:

After crossing the pedestrian walkway on the railroad bridge over the Potomac, the AT follows the C&O Canal Trail for about 4 miles, until you reach the south end of South Mountain, known as Weverton Cliffs. You ascend  the mountain, and the remaining 37 miles or so of the AT runs in a northerly direction on the spine of South Mountain, which is a 70 mile long ridge that extends from the Potomac in Maryland into Pennsylvania, and is the most northerly extension of the Blue Ride Mountain range of the Appalachians. And fortunately for Geocachers, almost it’s entire length in the State of Maryland is State or local parkland, meaning Geocaching is permitted, with the proper State or local permits. The State parks include South Mountain, Gathland, Washington Monument and Greenbrier, as well as Pen Mar County Park.

Geocaching on the AT in Maryland: 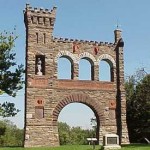 Depending on your definition of “on” the trail (how far off of it), and assuming a handful of Mystery caches nearby are actually “on” the trail, there are about 35 Geocaching.com caches along the AT in Maryland. There is a bookmark list, although it states that it’s accurate only as of 2010, and you can see there are many archived caches on it. We at OpenCaching North America have two Maryland AT caches, both virtuals. A major feature of the first one, The Battle of South Mountain is pictured on the left. This cache takes you to modern day Gathland State Park, site of that particular Civil War battle, part of the Maryland Campaign, on September 14th, 1862. Further North, and 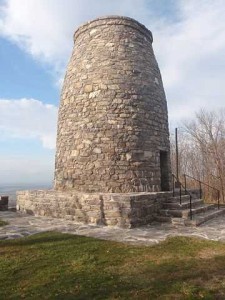 sitting less than 5 miles as the crow flies from the site of GW XIII, is the Original Washington Monument virtual cache. In 1827, the citizens of Boonsboro, Maryland became the first to complete a monument to George Washington! This 30 foot high tower, seen here on the right, sits on the summit of the appropriately named Monument Knob prominence of South Mountain. It had fallen into ruins twice in the 1800’s, and what you see today was restored to it’s original design by the Civilian Conservation Corps during the great depression from 1934-1936.

By that, we mean there are a few well known lookouts with great views of the countryside along the AT in Maryland. Of Course Monument Knob, and/or climbing to the top of it’s The Original Washington Monument, is one of them (see pics from two of our finders below). About 5 AT trail miles to the north is Annapolis Rocks. Here is a nice blog post about a hike to this lookout  (I have to get me one of those $2.99 breakfast specials). About 13.3 AT trail miles north of Annapolis Rocks, and only a couple miles from Pennsylvania, is the more popular and famous High Rock lookout. Here is a Flikr set of some excellent pictures. And yes, you’ll see lots of colorful graffiti. Note that all three of these lookouts have at least 2 Geocaching.com listed caches in their vicinity.

So who’s excited? GWXIII is four weeks from the date (GMT date, that is) of this post! We leave you with a thumbnail gallery of pictures taken by finders of our Original Washington Monument virtual. Click any to enlarge.