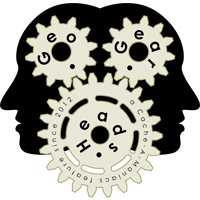 Our OpenCaching North America Admins Dudley Grunt and NativTxn were interviewed on GeoGearHeads episode 125, recorded live on May 22nd, 2014, and the archived show was released on their website on May 24th, 2014. You can listen below in the embedded audio player, and below that is the live video session from YouTube. GeoGearHeads is a near weekly feature with The Bad Cop and DarrylW4 discussing topics of interest to Geocachers, Location-based Gamers, and Technology Enthusiasts. They record the shows live through Google+ Hangout On Air Thursday nights at 9:10PM Eastern/6:10PM Pacific (The upcoming shows are listed on the Google+ GeoGearHeads page). You can subscribe to the audio version through iTunes, RSS, or Stitcher, watch the shows on YouTube, and check them out on FaceBook, Google+, and Twitter. This is also a rare episode in that The Bad Cop (Washington), and DarrylW4 (Michigan) were able to get together for GeoWoodstock, and record the show together live. As with most guests on GGH, Dudley Grunt and NativeTxn appear via webcam, should you like to check out the video session. And (blatant plug) should you, note that Dudley Grunt is donning a sporty OpenCachingNA T-shirt, available at our Swag Store at Spreadshirt.com. And all T-Shirts at Spreadshirt.com are 15% off until June 10th, 2014. 🙂